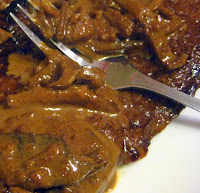 So I’ve been playing with sauces and had this random bottle of vermouth in the bar. For those of you with a degree in mixology you’ve probably got a few more uses for vermouth. Me, martinis are about it. Needless to say, this bottle of vermouth has been in my house for a looong time.

This recipe calls for the grape and herb infused flavors found in a sweet red vermouth. The brand I’ve got is Martini and Rossi Rosso Vermouth. It’s got quite a bit of what the Japanese call ‘umami’ or a sweet and savory flavor which is what gives this sauce it’s kick. Even my three kids love this sauce on rice, their steaks, or even sopped up on bread.

The wet:
1-2 shots (about 3 tbsp) of vermouth. I’ve made this sauce without meat, with a tablespoon of bacon grease, and in a skillet after pan frying some steaks. If you’ve just cooked up some beef, use the vermouth to deglaze the pan, if not, start with a tablespoon of butter or bacon fat mixed with about a tablespoon of flour until it makes a moist paste. Cook in your sauce pan over medium heat and stir until the fat / flour mixture turns a light brown (a roux) then add the vermouth. After that basic difference the rest is the same.

You’ll want 3/4 cup of heavy cream- but that’s the last bit in the sauce.

Add the vermouth to deglaze the pan or to the roux, mix and scrape thoroughly until the liquid comes to a quick boil. Now it’s time to add some tooth.

The dry:
Grab 6-10 of your favorite mushrooms (white, crimini- which are small portobellos, or my favorite shitaki) slice and set aside. 3 tablespoons of French’s fried onions (I had some left over from Thanksgiving) or sautee up some regular onion. This is purely up to you, you can even go without one or the other depending on your taste, this sauce doesn’t mind.

Add the mushrooms and onions and keep simmering until the liquid is reduced by about a third. This concentrates the flavors. It’ll take a bit because you’ve introduced a bit of water with onions or mushrooms.

Once you’ve got a dark, slightly thick sauce, add your heavy cream and bring the heat down to medium low. Add salt and pepper to taste. Let the sauce simmer until it reaches consistency that sticks to your spoon but still drips off the end (not runny but not gravy either). It should coat the mushrooms and onions easily.

The vegetarian version of the sauce (butter roux) is just as savory as the beef or bacon versions, aside from being just a bit sweeter in taste. I’ve not gotten up the courage, but this could be a great base to work up as a mushroom or onion soup.