These Cordial Cherry Brownies were a big hit at a party I went to the other night. My kids were so disappointed they didn’t get any. This brownie recipe is so easy to make because I use a brownie mix. Super easy!

For the brownies, I followed the directions on the box for the cake-like brownies. I then let the brownies cool for a few minutes, removed them from the muffin tins, then made an indent into the center of each muffin which I then filled with one cherry from the canned pie filling. I ended up not having enough cherries for the two boxes of cherry pie filling, so I made a toffee sauce to fill the remaining brownies. Here’s how to make cordial cherry brownies.

1 box brownie mix, plus the ingredients to make the cake-like version
1 can (about 21 oz size) of cherry pie filling
1/2 cup melted white chocolate

Prepare and bake the brownies according to the cake-like version in a greased mini-muffin tin (should make around 40 brownies total). Be careful not to overbake. Allow brownies to cool for two minutes in tin and then carefully remove. 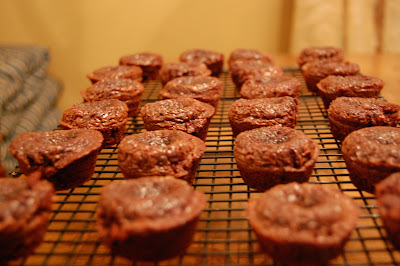 Using your knuckle or thumb, make an indentation into the center of each brownie. Fill with one cherry from the canned pie filling for each brownie. 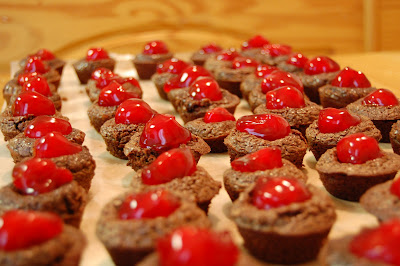 Drizzle melted white chocolate over the tops of the brownies.

Enjoy and serve either immediately or cover and serve for later.

Or cheat and keep them all for yourself! I won’t tell.